Swift too uses Automatic Reference Counting (ARC) to keep track and manage all the objects created by the application. This signifies that it handles Memory Management itself and we do not need to take care of it. But there are few situations where we as a developer need to provide few other information, in particularly, the relationship between objects, to avoid Memory Leaks. We would be discussing those situations here.

Reference Counting applies only to the instances of the Class because it is Reference Type. This means that multiple objects can refer to the same object. Where as Structures and Enumerations are Value Types.

Every time we create an instance of a Class, ARC allocates memory that holds information about the Type and Value it holds to. Whenever we assign a class instance to a constant or variable, that particluar constant or variable makes a strong reference to the instance and does not allow it to be deallocated as long as that strong reference exists. ARC keeps track of all the constants and variables currently it is referring to and will not deallocate until the last active reference is released. Once, all the active references are removed, ARC frees up the memory by removing the instance. This ensures that class instances do not take up unnecessary memory when not required.

Let’s see with an Example:

In the above Class named Employee, we have an initialiser that sets the instance and prints a message to indicate that initialisation is in process. This also has a de-initialiser that prints out a message when an insance of the Class is deallocated.

Now, let’s create Employee instance and assign it to the first variable emp1.

Now that Employee instance is assigned to the emp1. There is a strong reference from **emp1** to the new Employee instance and ARC ensures that this Employee is kept in memory and not deallocated. Retain Count has increased by 1.

Now, there are 3 strong references to Employee instance that we created at the beginning. The Retain Count would now be 3.

As soon as 3rd and final strong reference is set to nil, no further strong reference exisits. ARC is now free to remove the Employee instance from the Memory. Pretty Simple Huh!!. Lets dive deep in.

What are Reference Cycles?

There could be a scenario where two class instance holds a strong Reference to each other and there is no way for the system to deallocate them. This means that the Retain Count of both the class insance would never come down to 0. This is known as Strong Refernce Cycle. Let us see this with an example.

In the above code, we have created 2 class. One for Employee and other for Department. Both these classes have strong reference to Department(dept)and Employee(emp) instance respectively. The Retain Count for john and iOS variable would be 1.

We would create an Employee and Department instance. This in turn would create a strong reference to john and iOS variable (Image 1–1).

If we set the john and iOS variable to nil , there would still exisits a strong reference between the Employee and Department instance which now cannot be broken. Retain Count now would be 1. Since, the Retain Count did not drop to 0, ARC did not deallocate the instances. Such scenarios causes memory leaks in our application (Image 1-3).

How to Resolve these Reference Cycles?

Weak Reference should be used in cases where other instance can be deallocated first without any issue. Confused!!! Let us see this with an example.

Just add weak before emp variable in the Deparment Class. The class would look like the below.

Now, the only strong Reference left to the Deparment is from the iOSvariable. Setting nil to the iOS variable would reduce the Retain Count by 1, thus making it 0. Hence, ARC would deallocate the Department instance (Image 1-6).

Unowned reference too does not keep a strong hold on the instance it refers to. However, there is one major difference between Week and UnownedReference. It should only be used when we are sure that both the instance has almost same or more life span. A Weak references must be defined using optional whereas Unowned references must be defined using non-optionaltypes. Both do not increase the Retain Count. Lets see an example.

Suppose we are creating an application for a car Company where they need to keep track of every vehicle sold to the People. We would have Vehicle and Driver Model class.

In the following we have created 2 Class. Owner and Vehicle class. In this Owner may or may not Vehicle but Vehicle to come on Road would need to have a Owner . In such case, the Owner should hold a strong reference to the Vechicle but the Vehicle should just have a unowned reference to the Owner. This is because there is noVehicle which doen’t have an Owner . So, its existence only lies till the Owner owns the Vehicle. But the same doesn’t hold true for Owner.

Now, lets create the Owner and Vehicle instance and associate with each other. The Retain Count for the Owner instance is 1 which is held by variable. In case of Vehicle, its just the Owner who is holding the strong reference to it (Image 1–7).

Its existence is only till the existence of the Owner. Once, the Owner instance is deallocated, the Vehicle instance would automatically be deallocated as there is no strong reference associated to it (Image 1–8, Image 1–9).

In the First Part, you learned about some fundamental concepts of ARC such as weak, Unowned and how to resolve Reference Cycle using weak and unowned.

In this final part, you’ll learn about one last scenario, where both the properties should have a value and neither property should ever be nilonce the initialization is complete. Also, you would learn how to overcome the Strong Reference Cycle in Closures. Let’s dive straight into it.

Suppose we have a Country and President class. Each of these class stores an instance of the other class as a variable. This means that every Countryshould have a President and every President should be associated with a Country.

To fulfil this requirement without causing a memory Leak, you would need to declare one property (In our case countryPresident in the Country Class) as an implicitly unwrapped optional Property. This can be done by placing the exclamation mark at the end of its type annotation(President!). While for the other, you would need to declare it as an unowned property (In our case country in the President Class).

Suppose we have a Country and President class. Each of these class stores an instance of the other class as a variable. This means that every Countryshould have a President and every President should be associated with a Country.

To fulfil this requirement without causing a memory Leak, you would need to declare one property (In our case countryPresident in the Country Class) as an implicitly unwrapped optional Property. This can be done by placing the exclamation mark at the end of its type annotation(President!). While for the other, you would need to declare it as an unowned property (In our case country in the President Class).

Now, when the country is set to nil, president would also be automatically nullified (Image 2-2).

This strong reference cycle occurs because closures, like classes, are reference types.

Lets see how this strong reference cycle is caused. Suppose you have a PersonClass with firstName, lastName property. You also have a lazy closure property which would return you a full name by combining firstName and lastName. Lets name it as fullName of type ()->String To know more about closure, you can read the Apple Documentation.

The Person Class provides a single initializer, which takes a 2 argument (firstName and lastName). The class also defines a deinitializer, which prints a message to show when an Person instance is deallocated.

The person variable above is defined as an optional Person, so that it can be set to nil to demonstrate the presence of a strong reference cycle.

Even though the closure refers to self multiple times, Swift ensures that it only captures one strong reference to the Person instance. 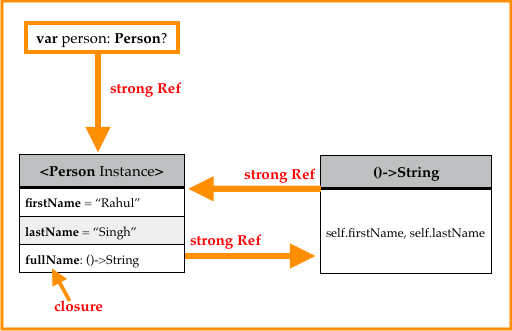 No message is logged while setting the person variable to nil . This shows that neither the Person instance nor its closure were deallocated. This is because of the Strong Reference Cycle created between the variable and closure (Image 2–4). 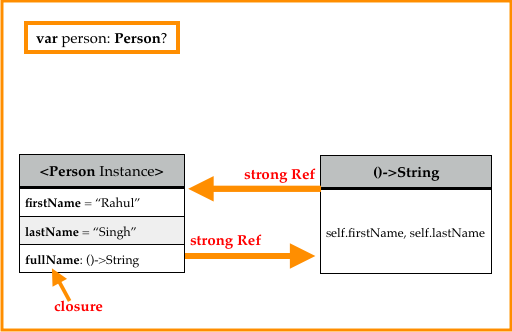 How to resolve the Strong Reference between Class and Closure?

To solve this problem, Swift has an elegent way called as Closure Capture List. You can define the capture list as a part of closure’s definition. A capture list defines a rule to use when capturing one or more reference types within the closure’s body. The way strong reference cycles between two class instances is resolved, ie, you declare each captured reference either to be a weak or unowned , likewise you can choose theses referneces depending on the relationships between the different parts of your code.

Each item in a capture list is a pairing of the weak or unowned keyword with a reference to a class instance (such as self) or a variable initialized with some value (such as delegate = self.delegate!). These pairings are written within a pair of square braces, separated by commas.

The implementation of Person Class remains same to the previous implementation, apart from the addition of a capture list within the fullName closure (Image 2–5). The capture list is [unowned self], which means “capture self as an unowned reference rather than a strong reference”. 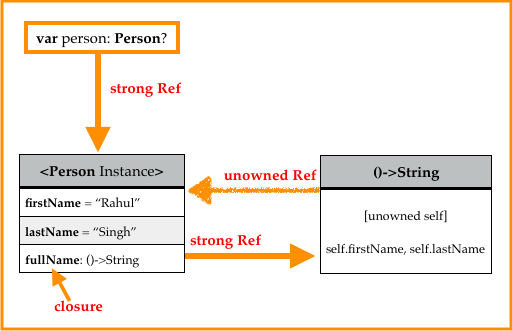 In contrast to earlier, this time setting person variable to nil would deallocate the Person Instance and print the desired message (Image 2-6). 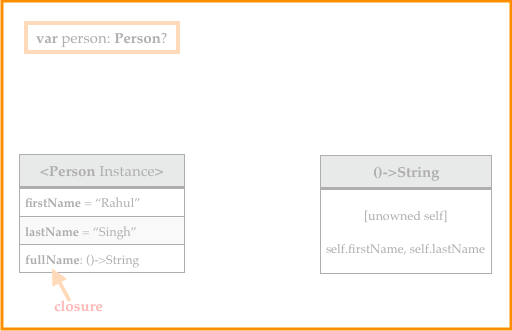 The Playground file can be found here. Feel free to play around with it. Now, poke in if we can use weak instead of unowned in the Closure of the Person Class? If yes, how can this be achieved?

Hope you have liked my tutorial on Automatic Reference Counting. 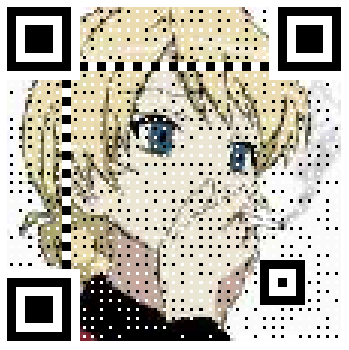 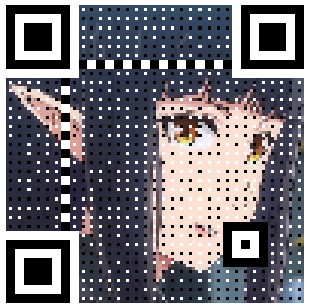